Let’s be clear, no one is suggesting that employers cannot have dress codes in the workplace, in fact it is recommended by ACAS that they do.

The issue that has been scrutinised by a parliamentary committee is whether or not some employers are seeking to enforce dress codes that detrimentally discriminate against women. The report made clear that detriment can include physical harm (wearing high heels in that instance), but also being made to feel uncomfortable or sexualised.

Particular industries were singled out: hotels and tourism, travel and airlines, temporary work agencies, corporate services, retail and hospitality. The theme running through that list is industries that are heavily public-facing and have a brand image to protect. We’ve already seen several cases involving airlines and accusations of religious discrimination, notably where the European Court of Human Rights determined that Ms Eweida should be permitted to wear a symbol of her faith. We’ve seen issues before with skirt length and makeup, this latest example shows that it remains a live issue.

It has been long established that it is illegal to directly discriminate against someone because of (amongst other protected characteristics) their gender. Direct sex discrimination is when someone is specifically treated detrimentally as a result of their gender, this can never be justified. Indirect sex discrimination is where a policy has the unintended effect of subjecting people of one gender to a detriment. This can be justified if it can be shown to be ‘a proportionate means of achieving a legitimate aim’.

So, whilst it’s perfectly legitimate for an employer to require that staff wear a uniform or ‘smart business attire’, if they impose obligations or restrictions which detrimentally affect one particular group or go beyond what can legitimately and proportionately be justified, they can find themselves facing censure and paying fines or compensation. Employers need to think carefully about how much detail they want their policies to go into and whether it goes beyond what’s absolutely necessary.

Whether or not the government will take action as a result of this report remains to be seen, but the heightened publicity that this case has brought will no doubt make staff who feel unfairly treated more confident in tackling their employer about this or reporting it in the press.

For further information on how to avoid discriminatory practices, see our guidance here.

The Equality Act is clear in principle in setting out what constitutes discrimination in law," it said. "Nevertheless, discriminatory dress codes remain commonplace in some sectors of the economy. 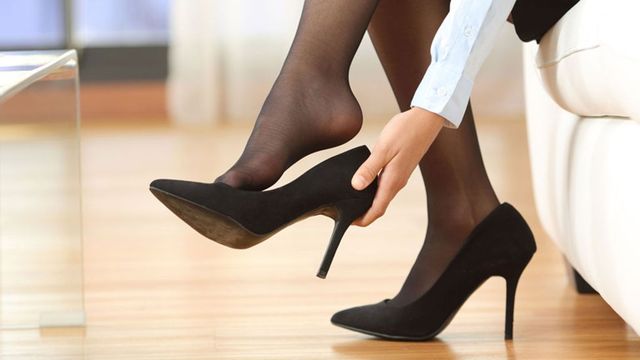 We think companies should be worrying about their staff's skills, not the height of their heels. #HeelsAtWorkEnquiry https://t.co/LlR81Mhnhk pic.twitter.com/I4guVtzkUJ